Artisan Compost Quality: What Does the Data Show? 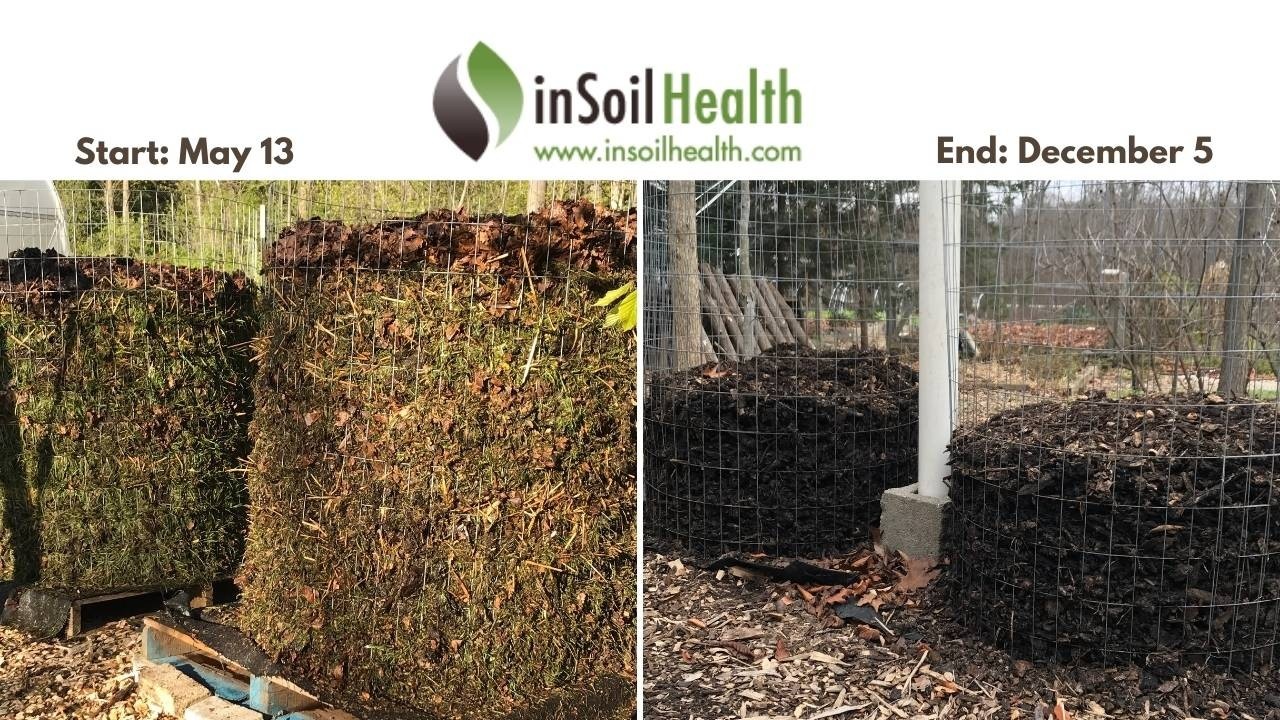 Let's start by clarifying, what is compost? There are many piles of mystery material out there, commercial and otherwise, that folks enthusiastically refer to as "compost" but I would never characterize it as such. According to Natural Resources Conservation Services (NRCS) composting is “The controlled aerobic biological decomposition of organic matter into a stable, humus-like product.” I agree with that definition but I might add "accelerated controlled" because it is truly speed + quality that most artisan compost producers are after. I would also add that quality compost contains adequate populations of the four soil food web functional groups in the right ratios. For example, a pile of stinky waste dominated only by bacteria won't help your plants.  Because quality compost is fundamentally comprised of highly diverse indigenous microbes that are adapted to the local climate, the effort of composting is the essence of regenerative agriculture. The level of diversity and the ecological resilience born out of a quality compost system managed in tandem with the growing system (e.g. cover crops) can power any sustainable cultivation effort at a very low cost. I'm very optimistic about the artisan compost movement; upcycling by-hand for the win!

It is true that the production of a high-quality compost is work. I understand there must be an exceptional value equation associated with the effort if more growers are going to commit the time. I believe this project makes a very strong case for the regenerative value of quality compost. Of course the final outcomes speak the real truth - these outcomes are evident in native mycorrhizal expansion, overall plant productivity, and fruit/vegetable quality which are all shown on my approach page - check it out.

The final data set for this project wrapped up on January 13, 2022. Logan Labs completed the mineral testing from samples that I reserved in December just before the compost was distributed out to grow spaces and the season for composting was closed down for the year. I wanted a balanced view of compost quality to include both biological and mineral outcomes. In many respects I've been lackadaisical in my approach to mineral management with the fundamental belief that mineral stores are already adequate in my clay soil. Therefore I've consistently prioritized the bio-effectors reproduced in compost; the soil food web microbes responsible for mobilizing minerals into plant-available forms. Out of intense curiosity, I wanted to see what was happening on the mineral side in the compost I was producing. The data that follows reveals the story.

Not every regenerative grower interested in producing high-quality compost for food and medicinal plant cultivation has access to animal manures. Some growers may simply want to avoid manures altogether as a matter of personal preference or due to the grower's inability to evaluate feedstock quality. For other growers, plant-based compost is just easier; it obviates NOP (National Organic Program) requirements that limit application timeframes. If you're producing compost extract/tea from your base compost piles over the growing season, this is an important benefit.

I am one of these growers that has chosen plant-only composting. For me it's an access issue - I don't have ready sources of quality manure. Plus, I'm increasingly concerned about the prevalence of manure aminopyralid/picloram contamination. Thus, the vast majority of thermal compost I've produced is completely plant-based. I've tested a variety of recipes and techniques and the methods I've developed are now producing highly reliable outcomes. That said, I've always wondered if I was missing out on something by not using manures - especially on the mineral side. So the purpose of this inquiry was to determine if there are any significant differences in compost quality when modifying high nitrogen inputs with and without animal manure.  I compared one thermal compost pile which was built using plant-only sources of high nitrogen to a second pile, built using chicken manure as the exclusive high nitrogen input source. Aside from this single variable, the two compost piles received the same green/brown inputs from the same input sources, were built on the same day, and received the same management strategies over the thermal and curing cycles. Initial inputs were measured to achieve (by volume) 10% high nitrogen (animal vs plant), 30% green material (nitrogen), and 60% brown material (carbon).

Finished Compost Biological Testing for both piles was performed once the piles reached ambient temperature. The results: 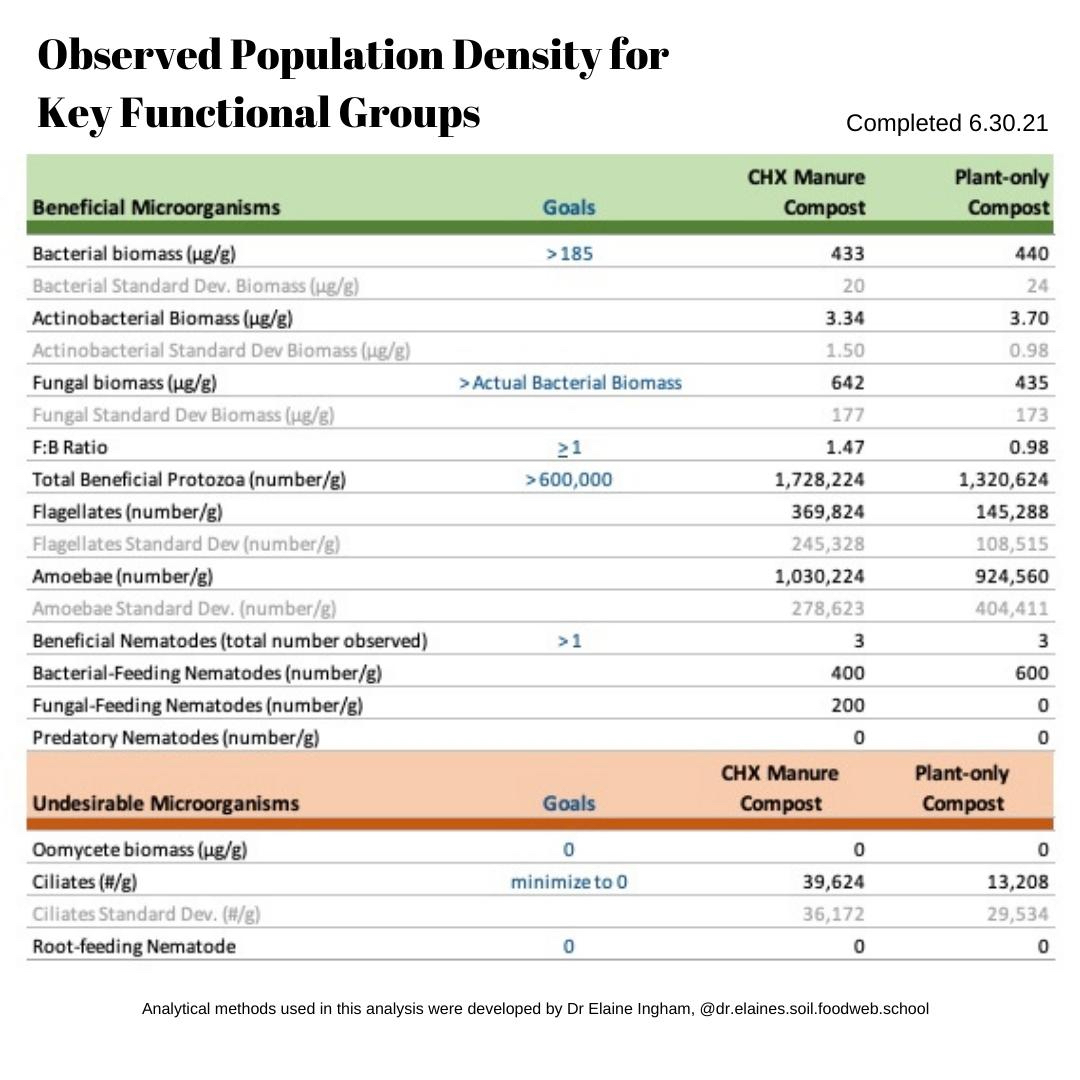 The manure compost demonstrated rapid initiation of decomposition with physical changes visible in just a few days. The pile heated up quickly and therapeutic temps were not only met but sustained over a longer period. Inputs used in this pile yielded favorable microbial conditions and no issues related to pH or salinity were noted to impede biomass development.  In fact, the initial fungal to bacterial biomass ratio was superior to the plant-only compost pile. This is an important consideration depending on your application goals. For example, at the time of completion this manure compost had a more favorable bio-profile for immediate orchard applications than the plant-only compost.

The manure compost demonstrated better water holding capacity than the plant-only compost.  It was much less work to maintain proper moisture levels when compared to the plant-only compost. The manure compost also took longer to reach ambient temperature; a long thermal runway to completion that could be beneficial for cold-season composting. If you're in need of compost in early Spring, these temperature trends may slow things down. If I were to use chicken manure as a source of high nitrogen again in the future, I may consider reducing the total input amount to 7-8% (by volume) instead of 10% I used in this compost heap. This may temper the thermal process while still achieving key sanitation metrics.

Plant-only compost observations - beyond the data:

The plant-only compost demonstrated a much quicker time to completion while still meeting all sanitation requirements.  So again, if you're a vegetable grower in need of compost ASAP this is the way to go. Plant-based compost inputs produced a diverse and complete soil food web biological profile. Usable compost was easily achieved in one month from start to finish. Interestingly, microscope assays revealed a more advanced micro and macro-aggregate formation in the plant-based pile. Possibly due to quicker cooling and faster overall compost succession. This is important because more aggregates mean greater production of fulvic acid. I was able to visualize the development of humic substances using a light microscope and the prevalence of golden-colored fulvics was impressive from the get-go in the plant-based compost. From my point of view, the presence of humic and fulvic acid is a very favorable finding if you need to leverage the fertility and sustainability benefits of finished compost sooner than later.

Good compost multiplies Soil Food Web (SFW) microbiology and does the work of mineralization converting nutrients into plant-available forms. The fundamental goal of any composting effort then, is the proliferation of SFW populations and the diversification of SFW species within those population groups. Over the course of the growing season, and with every batch of compost tea I produced from these compost piles, biological succession was closely monitored using a light microscope. Top four observations:

Both compost piles performed well in terms of meeting sanitation requirements (temperature and turning). Biological diversity and total populations were exceptional in both compost piles with the manure pile edging out the plant-only in total fungal to bacterial ratio as well as some other microbial population counts on initial assays. With succession these differences dissipated.

Interestingly, I've always attributed fulvic acid production to the prevalence of fungal biomass. Given microscope observations during this inquiry, I'm not so sure there aren't a host of other contributing factors - not the least of which is plant litter quality. Over time both piles performed equally well in terms of biomass population densities, ratios, diversity, and the production of humic substances.  Representative biological findings from both compost piles are shown in the images below. Note the prevalence of aggregates + humic substances; this is what I'm after FOR SURE. 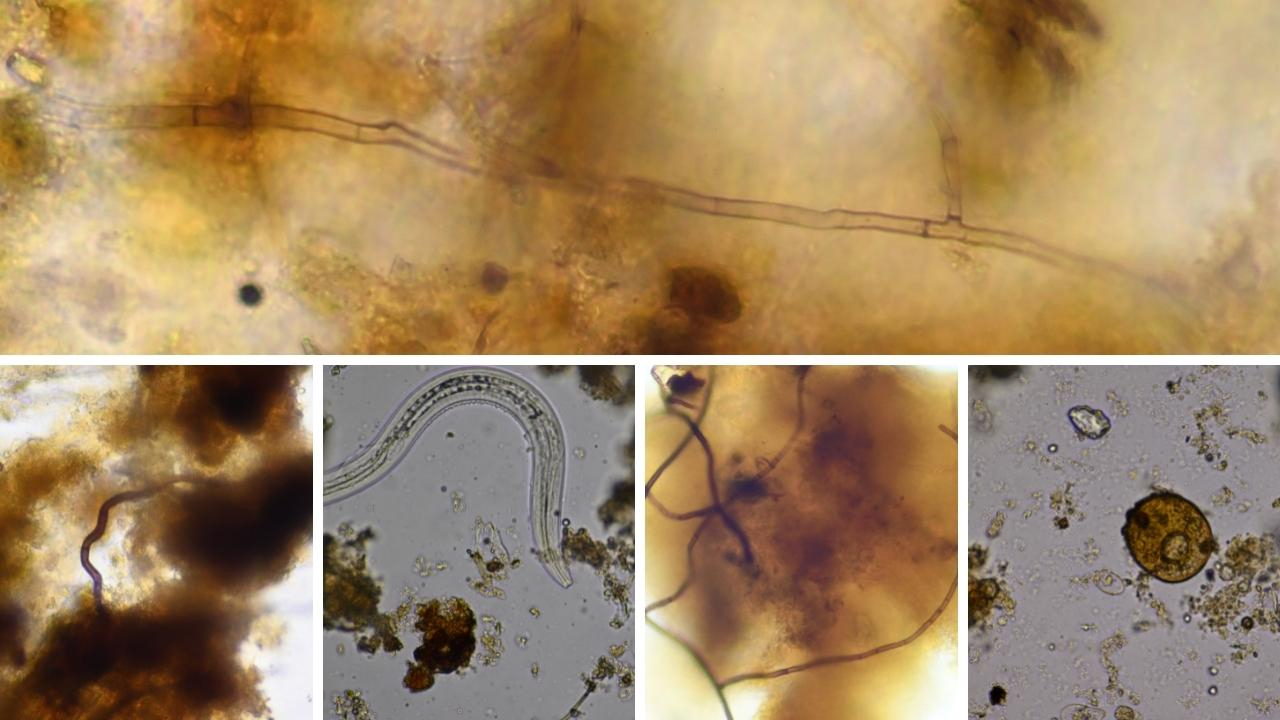 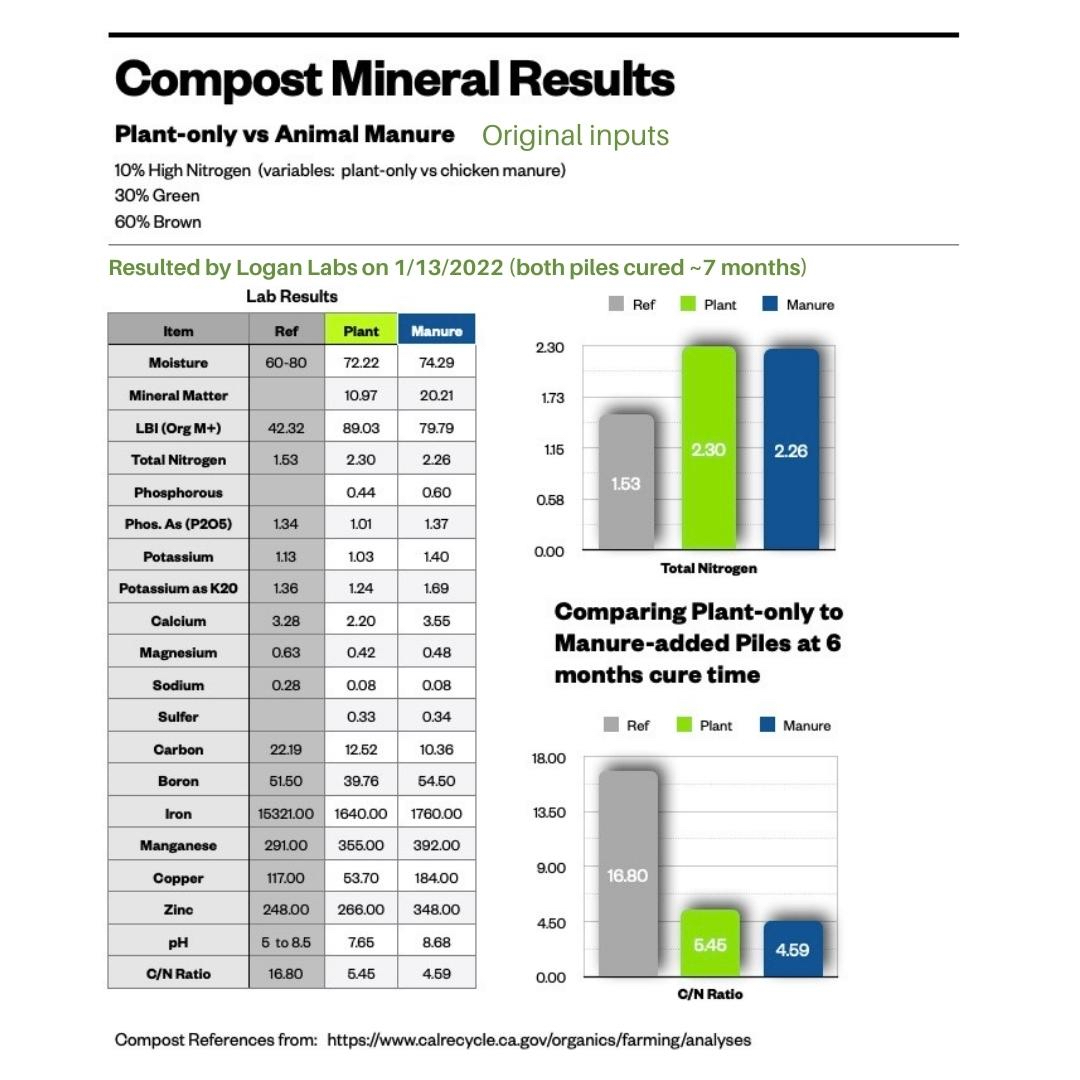 Quality compost for regenerative cultivation can be made with either animal or plant-based HIGH NITROGEN inputs. In this review, the data show that both piles will ultimately perform as both a biological amendment as well as a nitrogen/mineral fertilizer. That's pretty amazing!

Timing of the final compost application was in the warmer fall weather. This is ideal for ongoing proliferation of biomass though the winter months followed by a robust resurgence in spring. It may be less ideal for immediately optimizing the plant-available nitrogen profile revealed by chemistry testing. However, I've been advised that plant-available nitrogen will be accessible in the first year post application. This makes sense since the nitrogen is sheltered within the context of a large biomass of living organisms. The mineral profile will certainly benefit custom spring seedling mixes that I plan to inoculate using this compost.

Industry standards for mineral counts in compost are not well-established. Only trended data are available (that I know of). I've been advised that the mineral thresholds used in this analysis are fair and adequate.

These data fundamentally show that high-quality compost naturally enhances both mineral diversification PLUS indigenous microbial populations and bio-diversity. Together, this adds up to a holistic effect on nutrient cycling - BAR NONE!

These data also show that compost is an efficient and effective way to sequester carbon sustainably by storing it in soil instead of releasing it to the air. Growers who transform their own food scraps and garden waste into a living soil powerhouse rich in carbon stores are effectively shrinking their carbon footprint. True heroes of our time!

My sincere thanks to Soil Doctor for digging through the chemistry reports with me and advising me on mineral analytics.

If you're interested in our systematized composting processes used to achieve the outcomes illustrated here, consider joining our upcoming course on small batch thermal composting. Nature invented compost - we're just obsessed with accelerating her methods to achieve the very best outcomes for our plants and our ecosystems. Every. Single. Time.

AN INSIDERS VIEW OF OUR WORK & OFFERINGS!

Learn More About Our Goal-directed
Composting Course for Holistic Growers

In our virtual course, we'll show you how to turn your food scraps and garden waste into a natural soil amendment for food production. Thermal composting is a facilitated rapid-cycle process for regenerating soil and vastly improving natural organic cultivation. No more dependence on synthetic chemicals of any sort. Fertility is the job of the Soil Food Web! 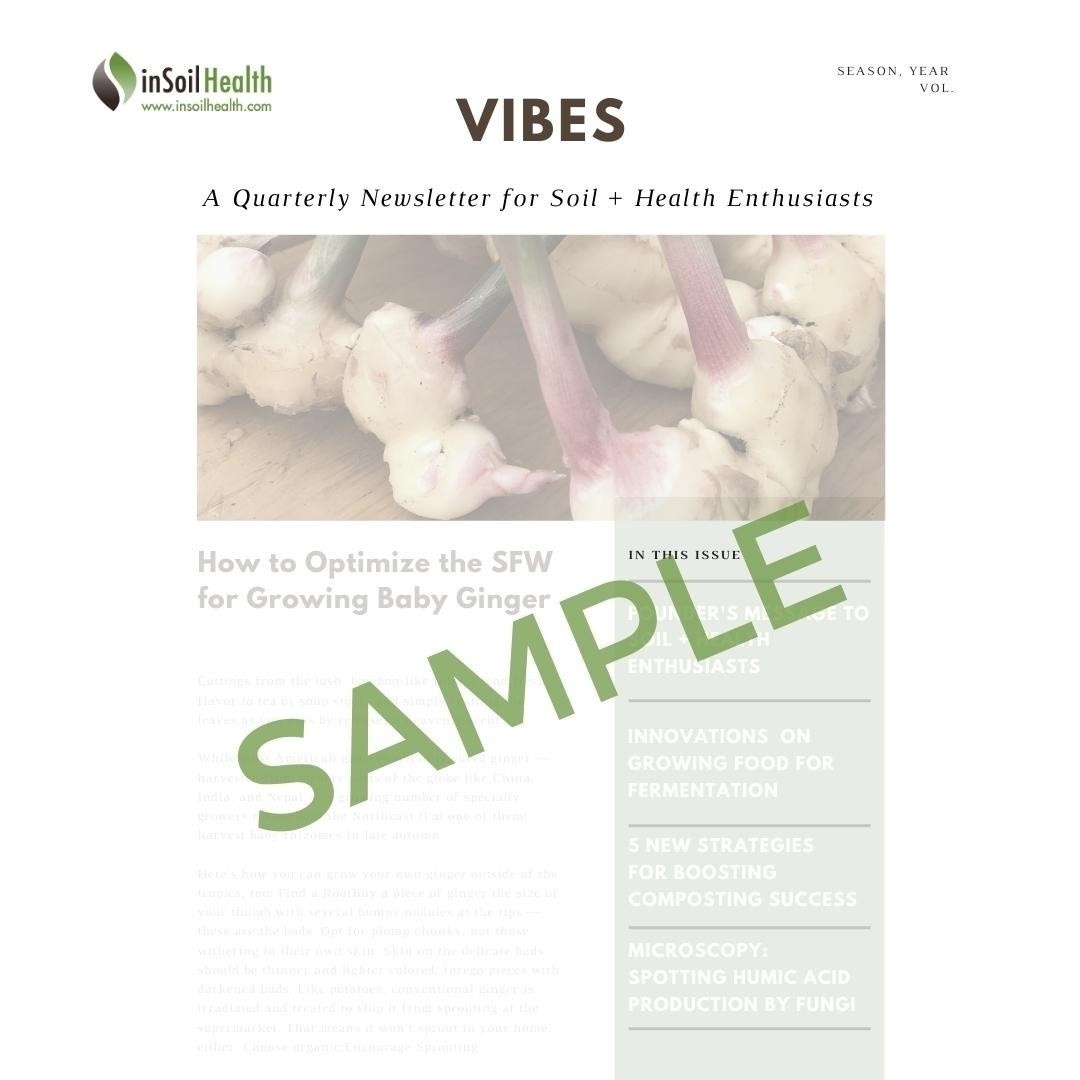 Published quarterly on the Solstice or Equinox.

An inside look into the work driving our thinking, products, & offerings.

Delivered right to your email.